January is a time for making annual resolutions. I just learned that this tradition began with the Babylonians about 4,000 years ago in an article by Melkote Ramaswamy in the IndyStar! Resolutions are really about commitment – a personal resolve to do something new, different, better or stop doing things which are holding us back.

I always feel badly for people who end up feeling guilty when they abandon their New Year’s Resolutions. So, in an effort to give myself a break and help others be easier on themselves, every January I choose a theme for the year instead of a single resolution.

Last year I chose “Pinterest Purge.” The previous two years I focused on “Decrapifying” and “365 Fewer Things” to continue to lessen my load and get rid of material possessions, unfulfilling volunteer work, and other things stunting my happiness. It felt good to clarify and clean on a regular basis throughout those years.

This year I’ve been inspired by my daughter who was, in turn, inspired by a family friend who is a confident adventuress. This friend has traveled the world – alone, with a backpack. She has learned so much about herself through these adventures, she is discovering coping skills she didn’t know she had, and is gaining a true world-view by living in so many different countries with incredible cultures. She is meeting amazing friends around the world. My daughter now 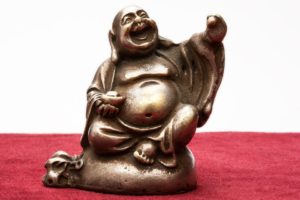 calls our friend her “spirit animal.”

I thought having my own spirit animal this year will give me a visual reminder of what I want to focus on for 2017. Hotei is my inspiration for the year! Many of you may have seen some version of Hotei in Asian restaurants and rubbed his belly for good luck. Hotei is informally called the Laughing Buddha because in Japanese arts he is always depicted with a big smile. He was actually a Zen priest and embodies CONTENTMENT and FORTUNE.

So, 2017 is going to be the year I focus on simple contentment and happiness. I will consciously remember to appreciative of the people around me and feel fortunate with the things I already have. It’s my aspiration to seek more happiness. Here we go!

What is your resolution or theme for 2017?